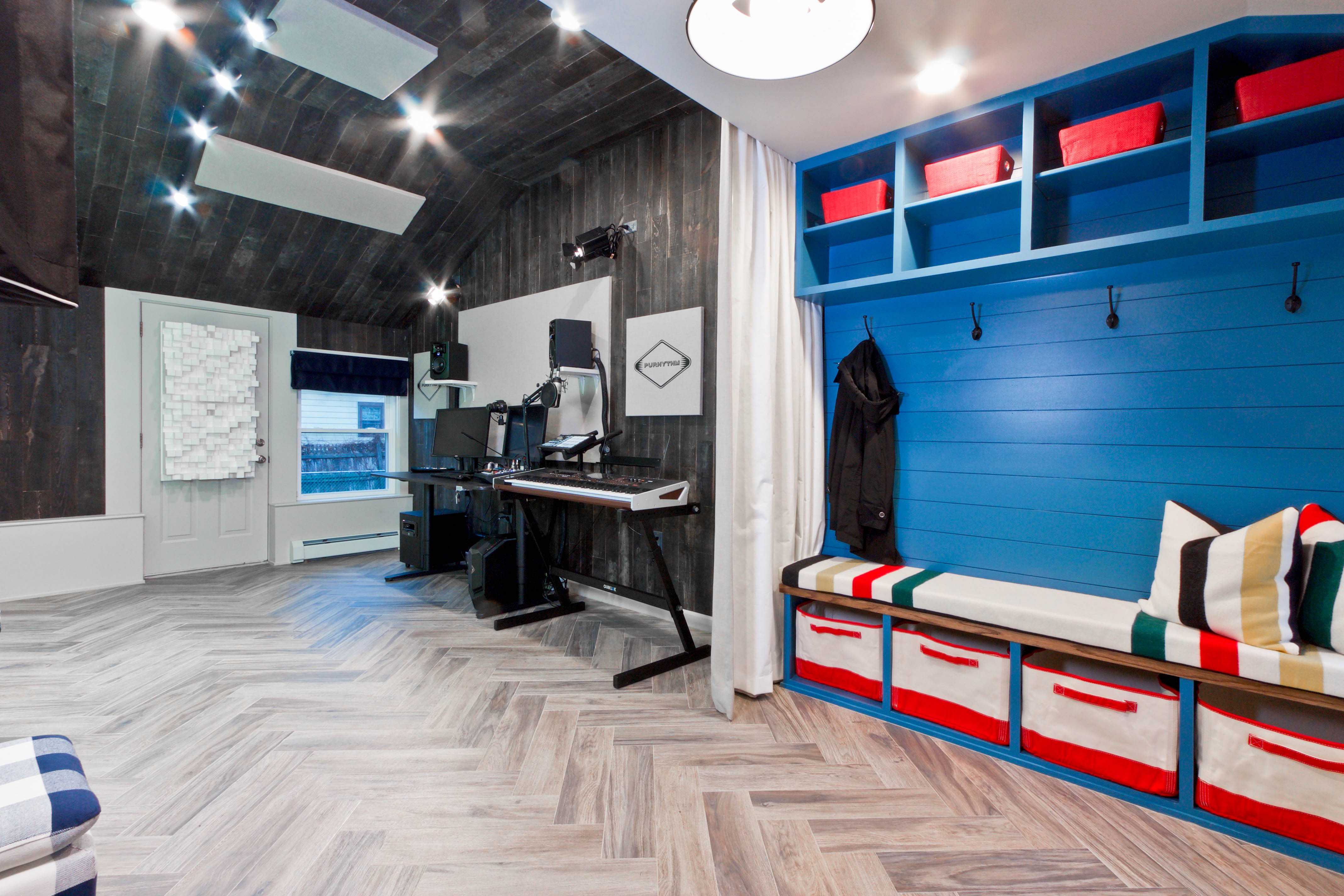 Ellie and Mike love giving back to their local New Jersey community. They have deep routes in Westfield and the surrounding towns.

So when George Oliphant of NBC’s “George to the Rescue,” a home improvement series with heart, had another opportunity for them to volunteer to help a local family, they didn’t hesitate.

“George to the Rescue” came to the Shah family’s Iselin home in February 2018. Diagnosed at birth with Osteogenesis Imperfecta, otherwise known as Brittle Bone disease, the son, Sparsh Shah, was struggling with the home’s limitations.

Sparsh is a singing prodigy and motivational speaker. While his physical abilities are limited, his inspirational reach is without border; his musical and motivational videos on social media have about 150 million views.

“There were a lot of challenges in the house in terms of accessibility,” Sparsh’s father, Hiren Shah, said. “We had a ramp which was not ADA-compliant, and Sparsh had a skull fracture once when he slipped in the wintertime on the ramp outside the house. And our house is two levels, and our bathroom is such that there was no accessibility. He had broken his leg at least four or five times while we were lifting him to the bath chair right inside the tub. They saw this and said, ‘We would like to do something for Sparsh and put us on the show.”

“George to the Rescue” came to Sparsh’s Iselin home in February 2018, adding a recording studio as well as creating an accessible bathroom for the musician/influencer. Airing April 6, Shah’s episode, which premiered April 14, 2018, was recently nominated for a New York Emmy in the “Human Interest: Program/Special” category.

Oliphant was truly touched by Sparsh’s amazing outlook. He noted, “I can’t make his bones be stronger or make him walk, but I can make his bathroom bigger and I can give him a space to do what he loves to do — the guy loves music and communicating and getting out there.”

Shah called it “life-changing,” especially for his son. Previously, accessing a recording studio and producers were not only expensive and difficult to find in terms of availability, but tricky as “accessibility was always a problem.”

“Necessity is the mother of invention,” Sparsh said. “And I guess you could say that George is the father. He brought the music studio to my house and now that I have that I am excited to say I can record my own stuff and am learning to produce — I have all these tools to produce now. I can make music now. I don’t need help. I can literally be a self-sufficient artist. And I don’t need any help doing my morning routine in the bathroom now — that’s really nice. It really is a gift.”

“Just being at home, now Sparsh can be anywhere in the world,” his father added. “He can do everything. And he can brush his teeth and use the bathroom on his own — it has given him a lot of independence. They also leveled the house — he used to not be able to go into the sunroom — so Sparsh with his power wheelchair, he can go anywhere in the house on his own.”

Michael Robert Construction was the general contractor for the project, and Ellie Mroz Design, the interior designer. Their teams happily donated countless hours to bring the project to fruition.

George to the Rescue” airs on NBC 4 New York. Episodes are available at Youtube.com via the “George To The Rescue” channel, on Facebook at facebook.com/george2rescue, Twitter at @George2Rescue and @GeorgeOliphant. For more information, go to GeorgetotheRescue.com. 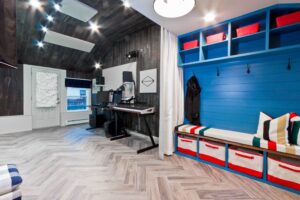 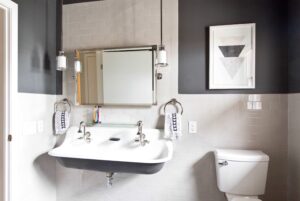 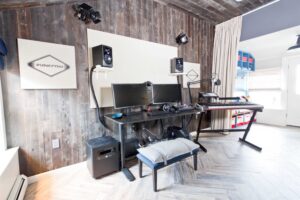 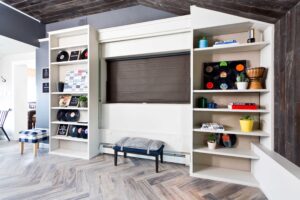 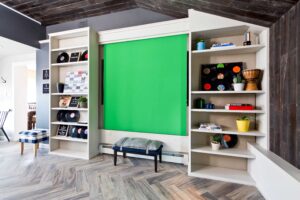 Thrilled to be featured in February’s @njmonthly

Our concept for full house transformation...from u

Biggest fans (and offspring) of Mike and Ellie. When these 2 brothers and best friends aren’t playing football or basketball, they can often be found with their hammers at demo sites and offering advice on opening up homes.

When he is not fishing, you can find Alex building…almost anything. With over 15 years industry experience, Alex is a master of tiling, carpentry, and just about anything to do with building.

As Office Manager, Lisa keeps records, spreadsheets, marketing and inventory in line. Trained in traditional marketing at Unilever and Pfizer, with an undergraduate degree from Cornell and an MBA from NYU, Lisa has always been unwavering about her passion for design and construction projects. When she is not in the office, she is hanging out with her 3 children, and can likely be overheard asking her husband what they can renovate next.

Kerry’s architectural foundation – over a decade in residential remodeling – and expertise in space planning gives her the ability to take ideas from concept to execution with both high function and high design in mind. Her expertise with computer-generated drawings enables clients to visualize their goals seamlessly. When she is not creating perfect spaces, Kerry enjoys running, tennis and strolling through her hometown (Westfield, of course!) with her husband.

For over 5 years, George has been a master at all of the endless odds and ends of construction. George is there to lend a hand when needed (which is likely all the time). In his spare time, he enjoys a competitive match of volleyball.

Kevin’s easy-going nature along with his precise attention to detail, years of managerial experience and architectural foundation make him an ideal Project Manager. Oh, and his Scottish accent is pretty cool. Ask him about his travels around the world, and you’re in for some unbelievable stories!

Pat has been building both residential and commercial spaces for over two decades. There are literally zero aspects of remodeling that will stump him! Expertise in engineering, a passion for understanding the working of things, and an exceptional drive  makes him an ideal project manager. His drive spans both work and personal life, with Pat spending his free hours training at CrossFit, pushing himself and others to break-through perceived “limitations.”

Eddie is a true “jack of all trades”. A master carpenter and tiler, there are few construction projects that can stump Eddie.

While she would vehemently disagree (gracefully), there is little Ellie cannot do — besides actual construction, which she leaves to her partner in life, Mike. After capturing Mike’s heart in Westfield High School, Ellie went on to Cornell, where she mastered Spanish and explored her passion for marketing, fashion and design. While she traveled abroad and explored teaching, building and design was never far from her heart. Ellie merged valuable experience at both Gandalf Restorations and REDCO Construction with her zeal for design at the inception of MRC. Her role as in-house interior decorator and design expert has added tremendously to client satisfaction and to adding that elusive je ne sais quoi to MRC’s projects. Whether it is working with clients to select the perfect knob, countertop, or furnishings, Ellie’s philosophy of creating spaces that give clients joy every day is clearly apparent. She has been recognized as a force in the industry, being selected as a showcase designer at the Housing Works Design on a Dime fundraiser. When she is not acting in her role as powerhouse design/build husband/wife team, Ellie enjoys working out, and above all else, spending quality time with her two sweet towheaded sons, Jack and Liam.

Born and raised in Westfield, NJ, Mike Mroz has maintained strong ties to his hometown, where he resides with his family and runs his business. Mike was born with a passion for building and remodeling; at age 2 he could often be found disassembling and reassembling household objects, much to the amusement (and chagrin) of his parents. From tree forts to full bathrooms to whole house remodels, Mike’s talents and hobbies burgeoned into a full-fledged business soon after graduating from Valparaiso University.

While Mike is most proud of the lasting relationships he has built with his clients, he also knows the importance of continuing education, and strives to remain ahead of the industry’s curve by being active in various local and national organizations and attending a wide array of industry and business-specific courses.

In line with his philosophy of the whole-house approach to remodeling, Mike is co-owner of Green Energy Improvements, a Building Performance Institute accredited company that performs home energy audits and energy efficient renovations throughout NJ.

While not working tirelessly to make client’s dream homes a reality, Mike enjoys working out, including regularly bench pressing and faux-wrestling his two adorable apprentices (and sons), Jack and Liam.